It was this time last year The Aspire Sport Marketing Group and the University of South Florida (USF) Athletics were signing a contract for an on-campus Fan Relationship Management CenterSM (FRMCSM) in Tampa, FL.  With heightened expectations and the support of USF Athletics, the FRMC, led by Brandon Lopez Manager of Sales & Service, hit the ground running. 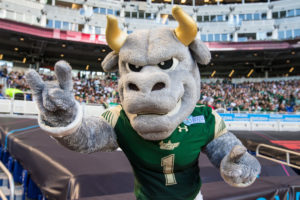 In the first year of operation and with Aspire only being responsible for NEW ticket sales, the FRMCSM has achieved the following:

“While the sales numbers have been incredible, it’s the level of professionalism, the genuine care for our brand, and Aspire’s desire to improve the experience for our student-athletes and fans alike that have made the greatest impression on me,” said Andrew Goodrich, Senior Associate Director of Athletics for External Relations at USF Athletics.

USF and the FRMCSM saw an immediate impact from the partnership through cultivating relationships with Bulls’ fans and the community.  The focus was not only building the fan base for the dominant revenue-generating sports like football and men’s and women’s basketball, but also the other ticketed sports.

“It has been a privilege for me to return home to my alma mater and contribute to the success of the USF program,” said Brandon Lopez, FRMC Manager of Sales & Service. “As the truest example of a partner, USF Athletics has provided us the support we needed to thrive as an FRMC to make huge impacts on attendances and revenue across all sports. With all the hard work and dedication the ticket sales team has put in this year, it excites me to see what we accomplish in Year 2.”