Steve Platz has been named the Manager of Ticket Sales & Service at the Cleveland State Fan Relationship Management Center (FRMC) in Cleveland, Ohio. The two-person staff will be primarily focused on selling the full ticket menu for Vikings men’s basketball. 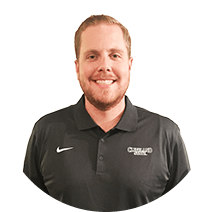 Platz began his career at the Arizona Diamondbacks as an Inside Sales Consultant in August 2011, exceeding his sales goal by 33% during his inaugural season. Platz was then promoted to Account Executive in the Season Ticket Services department in January 2013 where he specialized in retention of rookie season ticket holders, and increased renewals by 13% in his first year. His most recent promotion was to a Senior Account Executive & Team Lead in January 2015 where he oversaw two other New Season Ticket Holder Advisors, and surpassed renewal goals for both the 2016 and 2017 seasons.

Platz is originally from Poland, Ohio and graduated from the University of Cincinnati in June 2011 with a Bachelor’s Degree in Marketing.