Aspire held it’s 4thAnnual Rookie Leaders Retreat prior to the 2018 Leaders Retreat at Lake Lanier Islands in Buford, GA. Jon Brooks, who manages the FRMC at the University of Portland, earned the Rookie Retreat MVP. 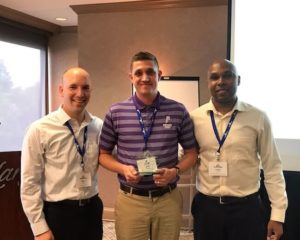 The 17 “Rookies”, or Leaders who’ve never attended an Aspire Leaders Retreat before, voted on the Rookie Retreat MVP.

“I want to say thanks to all of the other rookies at the retreat that thought I was the MVP; it is humbling to get your nod for the award,” said Brooks. “In reality, it truly was a collective effort; I was able to feed off the great discussions we were having in the room and provide my insights on the topics. Also, a special thanks to Chad Cardinal and Tony Garrett for leading me throughout the year.”

“Jon Brooks is incredibly deserving of Aspire Rookie Retreat MVP honors,” said Scott Leykam, Vice President of Athletics at the University of Portland. “He has done a masterful job using institutional knowledge and resources to become an outstanding asset for both The Aspire Group and University of Portland Athletics. We are incredibly grateful for Jon’s efforts and look forward to continued growth within the property.”

Jon transferred over to lead the Portland FRMC after spending six years in Portland Athletics’ marketing department. In the FRMC’s first year of operation, Portland has experienced an increase in revenue across four sports including baseball (115%), volleyball (67%), women’s basketball (43%), soccer (16%).