How To Manage The Unexpected

It’s been a little over a year since an accident left one of our Aspire family members paralyzed from the waist down, but Mino Solomon refuses to be anything but positive.

Mino, Aspire’s Director of Ticket Sales & Service for the University of Texas from 2014-2016, had traveled to Chicago for the football season opener against Notre Dame. On September 5, 2015, hours before kickoff, Mino set off to a local gym to get in a workout before he headed up to Notre Dame Stadium. 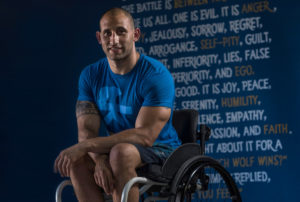 August 3, 2016 – Mino Solomon, who was paralyzed from the waist down the day of the 2015 season opener in a weight lifting accident, poses for a portrait at the CrossFit Jaakarhu where he trained in Austin, Texas. RODOLFO GONZALEZ / AUSTIN AMERICAN-STATESMAN

He never made it to the game.

During a workout he’d done 1000 times, a 260-pound barbell fell on his back causing instant paralysis from the waist down. Following surgery, Mino was transferred to Feinberg School of Medicine at Northwestern where he’d undergo rehabilitation.

A former safety for Saginaw Valley State football and CrossFit athlete, Mino was no stranger to physical fitness. His upper body strength and positive attitude are what fast tracked his rehabilitation in Chicago to allow him to return to Austin in just two months.

Mino hit the ground in Austin and one week later was back at work. He spoke about how most of the adjustments he made were internal. “I’m still the same person whether I’m walking or wheeling around. The routes I took through campus were just different.”

You’re going to have things happen, unexpected things. The question isn’t whether or not things are going to happen but what you do when they do. Keep focused on what you can control now and where your head is. Your reaction to adversity and how you decide to move forward is what is going to matter the most. How are you going to adjust? How can you take even a small step forward?”

He laughs as he remembers the day his battery died on the way to work. “Being pissed and staring at the car didn’t do anything to solve the problem. You have to recognize your emotion as an issue and simply decide to move forward with a solution, rather than wallow on the problem.”

Something he continues to focus on is managing uncertainty. Recognizing the difficulty and the emotion felt because of it. No adversity is ideal at the time, that’s why it’s adversity. What happens next, what we choose to do next determines if we grow and improve from it or we allow it to set us back. Take a breath, and ask, ‘how can we fix this?’ Then take a step back, come up with one solution at a time, and take positive and intentional action.

His perseverance is impressive, too. Mino continued working out once he returned to Austin. His rigorous schedule included work full-time and five days of rehab. Rehab for him was Monday through Friday with two scheduled sessions with the trainer and three on his own with an on-duty trainer, who was always available. A few nights a week and on the weekend he would even return to his CrossFit gym to work out.

At some point, you just have a choice… do nothing, wallow in self-pity and feel bad- OR move forward to try and make the best of it, continue to get better and enjoy life along the way,” Mino said. “It’s not easy to facilitate, but it’s a pretty easy decision to make.

Two months ago, Mino moved to Seattle and accepted a Director position with the Seattle Sounders overseeing the ticket sales staff. Mino wants co-workers to lean on him, just like he needed to someone to lean on after the accident.

So the next time you’re having a case of the Mondays or find yourself hitting a wall, take a step back and literally take a slow breath. Don’t let being down in the dumps define your day and shut you down. Recognize the problem, adjust, put on a smile and find your solution. At the end of the day, the only thing you can control is you… Choose your attitude!

2 years after Aspire family member Mino Solomon’s life changing injury, he continues to inspire us all with his positivity and perseverance. #AspireFamily Watch the video below:

“Look at a stone cutter hammering away at his rock, perhaps a hundred times without as much as a crack showing in it. Yet at the hundred-and-first blow it will split in two, and I know it was not the last blow that did it, but all that had gone before.” -Jacob Riis Yesterday marks two years from a life detouring injury. This year it’s a celebration of progress. I can now reflect on the positive changes and not obsess over simply recovery or the pain, struggle, sadness or loss that was brought by that moment. I feel so fortunate to have positive changes physically but more importantly I reflect on and feel blessed to have positive changes as a man. I realize now, that I have grown both physically and mentally in the last two years. That this unexpected challenge combined with incredible people pushing and pulling me to try and be my best version of myself has led me to be what I hope and believe is a better man. To all of you who have stuck by me, continued to love and support me, allowed me to be a part of your lives and wouldn’t have it any other way, I am forever grateful and will do my best each day to live up to you. Through ups and downs, I’m getting closer physically and mentally to being the man I hope to be, for myself, my family, partner, friends, peers and those around me and anyone I can positively effect. Better than I have ever been, both physically and as a man, that’s the goal everyday and that’s the opportunity that I was given with a moment two years ago. One day at a time, brick by brick. #brickbybrick #mobetta #family #progress #invictus #onemoreblow #sci #adaptiveathlete #onedaynobraces

[NEW] Update on Mino (September 4, 2018): Competitive Crossfit athlete Mino Solomon shares a raw and powerful look at how he fought against letting that half-a-second define his life…

The Good Wolf from Karl Stelter Studios on Vimeo.