In conjunction with the 6-year extension between Eastern Michigan University (EMU) and The Aspire Group, Fan Relationship Management Center (FRMC) Manager Jeff Czachowski has been promoted to Director of Ticket Sales & Service. 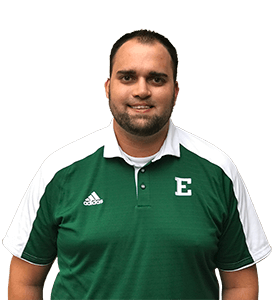 Czachowski is responsible for overseeing the ticket sales, operations, and service efforts of the EMU Athletic Department.

Czachowski has been managing the EMU FRMC since its inception in 2015 and during his tenure has seen increases in ticket sales revenue (more than 50 percent), football season tickets (195 percent) and new ticket-related donation revenue ($50,000+).

Czachowski is also an adjunct professor at EMU with two classes: Revenue Generation and Sports Ticket Sales I & II.

Czachowski joined Aspire and the University of Maryland Athletics in 2012 as a Sales & Service Consultant and in just under three years was promoted twice. While in his initial position as Sales & Service Consultant, he received the Maryland FRMC Leadership Award. In his final year, Czachowski developed, implemented and managed the structure and strategy of a new group sales department at the FRMC, the first of its’ kind at Maryland Athletics.

Prior to Aspire, Czachowski held internships with the Detroit Pistons (NBA), Port Huron Icehawks (IHL) and the Saginaw Spirit (OHL). Czachowski accepted his first full-time position with the Bossier-Shreveport Mudbugs (CHL) in Shreveport, LA before moving north to work for the Columbus Blue Jackets (NHL).

Czachowski grew up in Marysville, MI and attended Northwood University (Midland, MI) where he received his BBA in Entertainment, Sport & Promotion, Management.