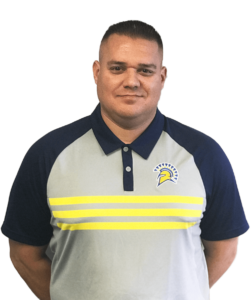 Lopez, a San Jose native, and an Aspire Sales & Service Consultant will be charged with all ticket sales and service functions with a primary focus on Spartan football and men’s and women’s basketball.

He joins the Spartans after serving as the Vice President of Sales for the San Francisco Box Office. He was responsible for designing and implementing the organization’s business sales strategy.

Lopez began his sports business career in the Bay Area with the San Francisco Giants as an inside sales representative and experienced first-hand the team winning the 2010 World Series.

Lopez worked as a consultant for Super Bowl XLVIII at Met Life Stadium in New Jersey after serving two years as a Sales & Service Manager with Stanford University Athletics. At Stanford, he contributed to several department firsts – the first Annual Giving campaign and the first sell out of football season tickets at Stanford Stadium.

Lopez briefly left the Bay Area in 2014 to serve as the Jacksonville Jaguars’ Group Sales Manager.