The Aspire Group welcomes Brian Specia as the Director of Ticket Sales & Service at the University of Connecticut (UConn) Fan Relationship Management Center (FRMC). Specia’s responsibilities will include inbound and outbound ticket sales, service & retention and stand-alone donations to the Husky Athletic Fund. 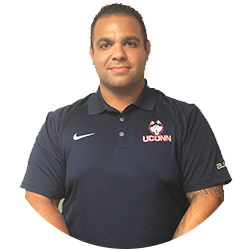 Prior to Aspire, Specia was as a Senior Account Executive of Premium Seating for the Vegas Golden Knights’ (NHL) inaugural season where he closed a seven-year, $3.8 million suite deal for T-Mobile Arena and secured $300,000 in premium seating in just one month.

Before the Golden Knights, Specia served as the Corporate Sales Manager for the Tampa Bay Lightning (NHL) where his sales team eclipsed $10 million in new business and sold one million dollars for a one-night event.

The 13-year sport industry veteran also worked for the New Jersey Nets (now the Brooklyn Nets; NBA), Florida Panthers (NHL) and the National Hockey League (NHL) headquarters. Specia is from New Jersey and graduated from Monmouth University with a Bachelor of Arts in Communications and Media Studies in 2004.